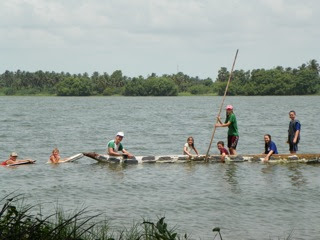 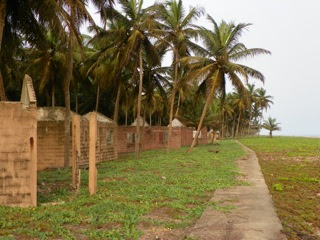 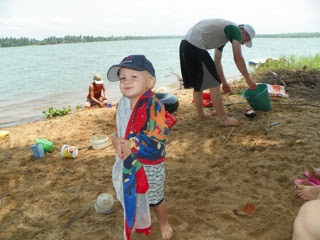 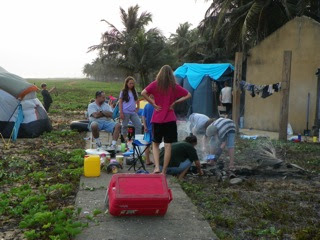 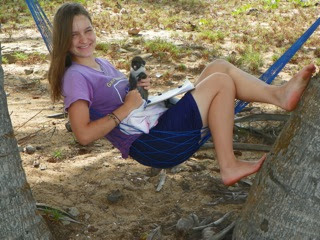 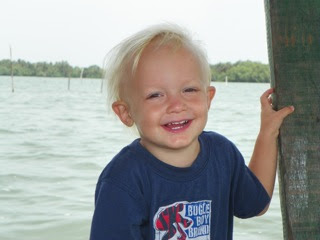 Some think we are crazy --why would we choose to go off and live without even a hope of electricity or water in the pipes? It was fun. Our destination was a deserted peninsula that separates the ocean from a river. There is an abandoned, stripped hotel there with a sidewalk running parallel to the river --nice for sitting on and setting out meals. It was supposed to be a 3 hour trip.
We left on Sunday after church for Grand Lahou which is on the way to Abidjan --(We needed to go to Abidjan early Monday morning to try to get my visa, sell 2 puppies, pick up Seth from the airport at 11:30 AM and head back to Grand Lahou to meet up with Messers.) We arrived at 9 PM with hungry, tired kids --including us. Things in Africa tend to get worse because of the bad roads and lateness of the hour. There is not 24 hour service for food. About the best you can do fast is French bread --which is very yummy. We got avocado, cucumber, tomato and put that in bread - nice.
Monday we were up at 5 AM to wash the puppies - 3 of them - on to Abidjan. I'll make this short - because of an accident up ahead we didn't get to Abidjan until 9 AM (supposed to be a 2 1/2 hour trip max.) The first couple bought a puppy - on we went for the visa. OH, the MONKEY was with me since we didn't want to leave it in the hotel. The kids stayed in the hotel to sleep a little - it was Dan, Lydia and I. The visa has to wait since it is only good for 3 months. On we went for groceries, (the other people who wanted a puppy wouldn't pick up their phone), picked up Seth who had a great time in Kenya, and back to Grand Lahou.
We were just pulling into GL when Andy called that their car had stopped completely, right on the other side of town --now it was 3:00 PM. On we went to pick up Becky and the kids; the men brought the car in - limping - huge problem - had to be left in GL with a mechanic to find parts in Abidjan and work on it while we were on the camping trip. By the time we were figuring out all this, it was getting late. The older part of the group went ahead to the camping spot ---take them to the dock, get a motor boat to drive up the river to where we wanted to camp - set up camp in the dusk around 5 PM. It gets completely dark by 7 to 7:30.
Meanwhile, I drove our car back to get Andy and the younger part of the group - another load over by 8 PM. We were able to eat sandwiches I had picked up in Abidjan ---all was fine and to bed in our tents we went. Don't forget --2 puppies and a monkey were with us as well. They really were no problem --just added babies along. I think there should be an age limit on camping --5 and up.
We were able to swim in the river every day - float down the river, walk up the beach, ride the canoe ---everyone had a great time. Seth even rigged a swing to swing out over the river.
The main funny story --the first night we weren't well organized. We had a king air mattress (aren't we camping in style?) in our tent. Gideon was on a pillow, then me on the air mattress next to Esther, then Dan and then Rebekah. Now, those two little girls are rollers ---I tell you, we didn't have this thing planned well. During the night I heard Esther go "Ahhhhhh." I told Dan, "Move quick. She is peeing." It was funny and yes she was. We changed the sheets and were fine after that.
The next night a huge storm kicked up. Andy and Becky's tent almost went over ---moored only in the sand. We were up trying to rain-proof the site and praying that it wouldn't hit. It was a big storm - lightning and thunder ---very beautiful. And to think, God is so much more powerful than the storm. He is ALL power!!! lightning and thunder ---very beautiful. And to think, God is so much more powerful than the storm. He is ALL power!!!
Well, God let the storm pass with only a few sprinkles our way.
The rest of the trip was uneventful ---good food and fun. If you want more details or have questions - feel free to ask.
After 3 nights on the beach we went back to the hotel at GL --it even has a pool - $20 a night. We all got washed up and slept WELL.
Andy and Becky's car still wasn't ready on Friday. We stayed with them until 11:30 AM then left to get to our meeting in the village on time. They came later after their car was running. They have more stories about that. Praise the Lord we all made it home safely.
Thanks for all your prayers. This is called - real family time - smile.
Love,
Dan and Joan and Co.
Posted by The Cuthbertson Family at 3:54 PM

The Cuthbertson Family
We serve with Baptist World Mission in Cote d’Ivoire, West Africa. Our ministry is church planting including teaching the kids, women and men, witnessing and doing visitation every week. We feel strongly that it is during this time that most people are saved. My main ministry is our home. God has blessed us with 12 beautiful children, whom I have homeschooled. They range from 30 to 10 years old. We all use French in our ministry. Ruth and Richard Jertberg and their 6 children are missionaries to Madagascar. Hannah and Nathan Schrock and their 2 children are missionaries on deputation to Côte d’Ivoire. Seth and Paige and their 2 children are also missionaries in Côte d'Ivoire, working in the town of Sassandra. Lydia is in her final year at Ambassador Baptist College and is seeking God's will. Susanna, engaged to Matthew Schrock, are making plans to come work with us after their marriage, while they seek God's will. Isaiah, Stephen and Rebekah are also at Ambassador. Josiah plans to attend Ambassador in the fall of 2021. Joseph, Esther and Gideon are still being homeschooled. They still help with the music, the nursery and the youth, and are ready to substitute teach when needed.